Fake news concerning reports on mercury in the River Odra 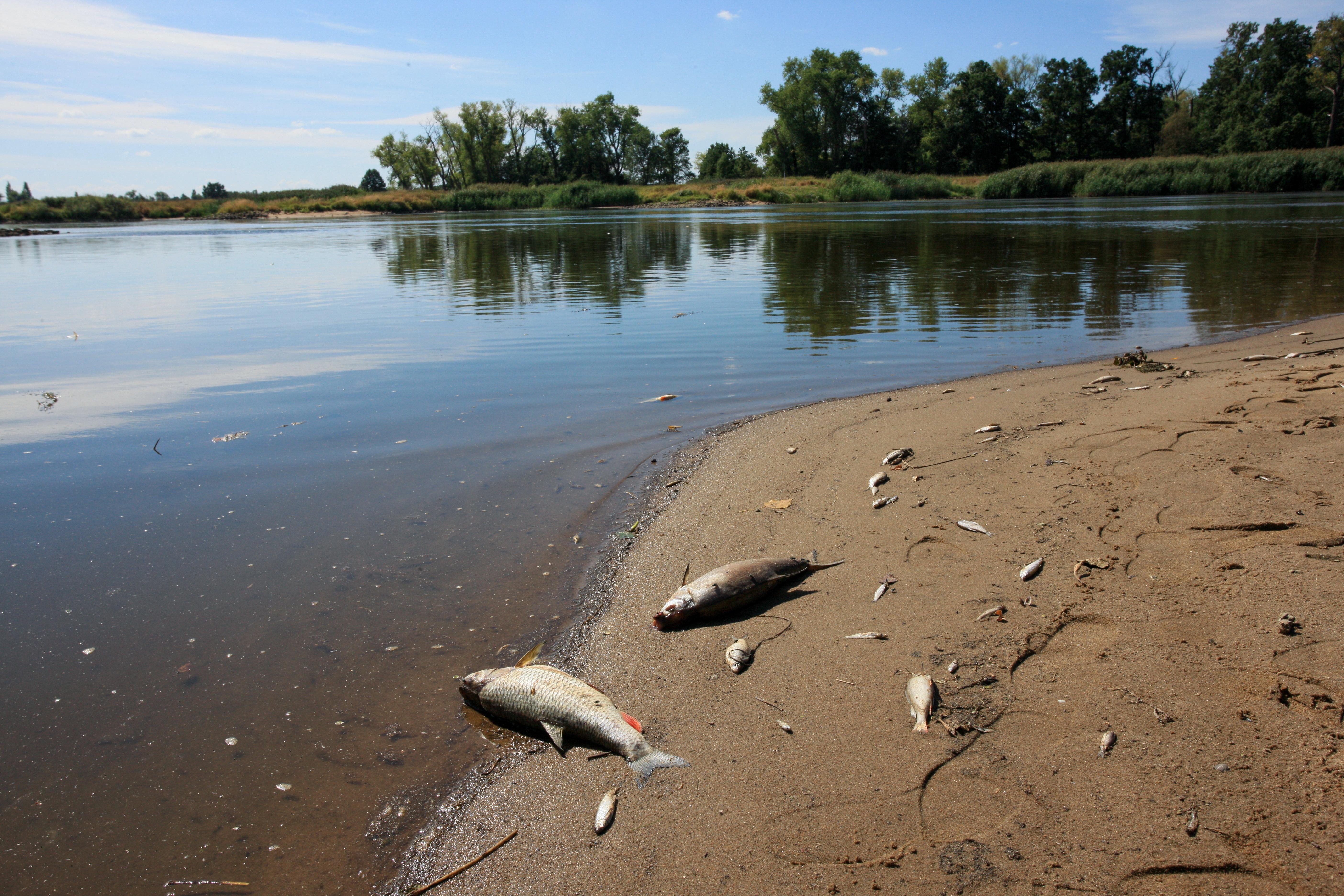 For several days after August 11, false information was circulated in the Polish media about an unusually high mercury level in the waters of the River Odra which had apparently caused the death of masses of fish. The fake news about life-threatening mercury in the water was based on information from a single news source in Brandenburg that was published before any official research had been presented in Poland and Germany, and is an incident can certainly serve as a case study for how fake news is spread.

The fake news, also picked up by Russian and Belarusian media, spread very quickly and caused much public panic. The media reports, at that time, stated that mercury which had accumulated in the River Odra and its fish would be passed on to humans and also poison subsequent generations. In addition, they indicated that animals, such as birds and beavers, would die as a result of having come into contact with the water. Moreover, it was pointed out that the water had caused injuries to fishermen who were collecting the dead fish despite them wearing gloves. Certain accounts compared the contamination of the River Odra to the disaster at the nuclear power plant in Chernobyl. Experts maintained that because the internet was "bombed" with fake news, it was difficult to gain any truthful information, and eventual reports from Polish and German state institutions were not trusted. And this was despite the fact that both Warsaw and the German federal ministry of environmental protection had denied the sensational fake news about increased levels of mercury in the River Odra.

According to Dr. Piotr Luczuk, an expert in the field of media manipulation, the fake news concerning the mercury in the River Odra would go down in the annals of fake history because of the media coverage it was given and because topics related to ecological disasters that may be a threat to human health or even life, the so-called biohazards, aroused great public interest.

He also claimed that some media and politicians had used false or unconfirmed data, or had even fabricated material to gain "political advantage".

"Russian and other troll farms which have a strong presence in Poland operate using a similar principle," he said. "They generate threats and social divisions to influence the political scene, and the fake news concerning mercury in the River Odra is a classic example of the phenomena described above."

The fake reports regarding mercury in the River Odra began circulating on the internet on the evening of August 11. As we described in our fact-checking report on August 13, (https://fakehunter.pap.pl/raport/df8b82b7-7f8d-4e29-ac41-7c94491d1f4c), it was on that day that the first mentions of an article titled "Mercury detected in water samples from the River Odra," were published by the regional German news website RBB24, and appeared in Poland.

RBB is a radio and television broadcaster which serves Berlin and Brandenburg, and is a part of the federal ARD network.

On the evening of Thursday, August 11, the news about mercury in the River Odra was repeated in a tweet by Robert Suligowski from Poland's Green party, who said that it had taken Polish authorities "two weeks" to do what Germans did in just "one day".

Moments later, a tweet by Pawel Wita stated that research done in Germany had concluded that the river was contaminated by mercury and he chided the Polish authorities for not being able to discover any such evidence. His entries have since been deleted, but his tweet about mercury was shared later that evening by Berthold Kittel, a TVN24 journalist, who passed on this unconfirmed information regarding the detection of mercury in the River Odra, which then spread across the internet in Poland.

As we explained in the above-mentioned Fake Hunter report, Germany had not officially confirmed, neither at the federal or even local level, information about the high mercury content of the River Oder. Nor did they do so on Thursday or Friday, when Polish mainstream media, politicians and internet users were beginning to distribute the fake news about the mercury .

These "fake spreaders" did not thoroughly read the German text on which they based their statements. It was clear from the RBB24 article that the information about mercury in the river was unofficial. The German text quoted a top German environmental administration official who said: "We don't have any official reports yet, but… they do point to mercury as a cause (in the River Odra catastrophe - PAP)."

The most important German media outlets in Germany approached the subject from a distance preferring to wait for the official results of the studies.

In Poland, however, the fake news about the mercury spread over the internet very quickly thanks to, among other factors, the entries of TVN24 journalist Bertold Kittel, who re-tweeted the RBB24 article, and then forwarded it to the Polish newspaper Rzeczpospolita which published it late on Thursday, August 11. The title of its article was unambiguous: "Mercury was found in German water samples from the River Odra." In another tweet, minutes later, Kittel added his own commentary: "Mercury in the Odra. This went undetected by Polish laboratories. Initial information about the dead fish and the stench appeared on July 13. They observations were made at a lock on the canal below the state chemical plant in Kedzierzyn."

He also retweeted the post of activist Jan Mencwel: "And so the Odra was poisoned with MERCURY, a substance that is considered to be deadly… including to people... How is it possible that this has not been detected?... Dismiss (Prime Minister Mateusz – PAP) Morawiecki NOW."

On the following day, August 12, the fake news about the mercury became the "topic of the day" in all media and aroused great interest in Poles, as reflected in Google Analytics data which showed nearly 200,000 searches related to the River Odra.

Other media outlets such as the Gazeta Wyborcza newspaper, the Onet and Wp.pl websites and RMF24 radio followed in the footsteps of Rzeczpospolita and presented the unconfirmed information about mercury as fact.

At the same time that the fake news was presented, catastrophic news concerning the harmful effects of mercury on human health also began to appear. "Mercury in the River Odra? Doctors on the risks of organ damage and even death," read a title of an article on the Onet website.

On August 12, many politicians began spreading unconfirmed information concerning mercury in the river. Opposition leader Donald Tusk, from Civic Platform said: "Not only are the fish in the River Odra dying, the whole country is dying under the rule of (governing Law and Justice (PiS) party leader Jaroslaw – PAP) Kaczynski," adding that "PiS can be compared to this mercury."

The fake news was also eagerly picked up by Russian media. As early as August 12, it was distributed there as intensely as it was in Poland.

As an example, the website gazeta.ru reported that German authorities considered Poland guilty of a causing a major environmental disaster after mercury was discovered in the cross-border regions of the Odra.

In Poland, this stream of fake news was cut short on Saturday, August 13, when the results of the official German tests conducted on the River Odra were announced by Poland's Climate and Environment Minister Anna Moskwa. She wrote on Twitter that "mercury was not present."

"Analyses on both sides of the border show high salinity," the minister added.

On the same day, Moskwa, in another tweet, revealed additional data which further negated the false news. "The State Veterinary Institute has completed tests on fish for the presence of heavy metals, and this has been ruled out as the cause of their death," she wrote.

The fake news was also denied by Urlich Schulte, spokesman for the German Federal Ministry of Environment (BMUV) who, on August 15, said that mercury was not detected in fish and in the waters of the River Odra.

Intensive toxicological studies are still underway on both sides of the River Odra, as are investigations conducted by the Polish police and the prosecutor's office, but the poisoning of the Odra with mercury and other heavy metals, has so far been ruled out.

The Polish fake news did also not go unnoticed by the Russian disinformation machine. Articles about mercury in the Odra in Russian media were tracked by Michal Marek, who conducts research on Russian disinformation activities in the media of Eastern and Central European countries. He pointed out that, currently, reports from the German side on the mercury were the most emphasised and that more fake news could be expected.